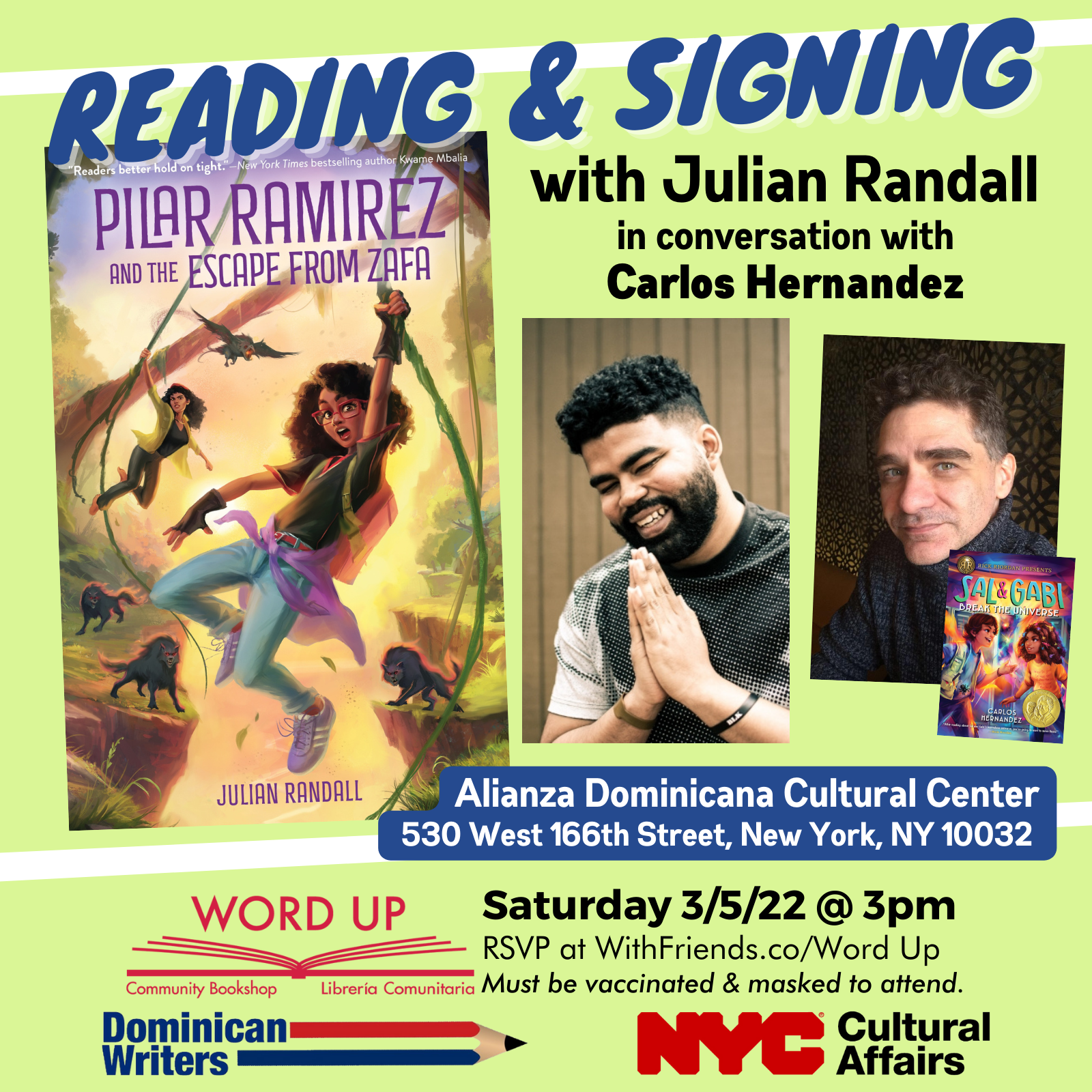 Join us for a celebration of the newest adventure story Pilar Ramirez and the Escape From Zafa by Julian Randall, a buzzy middle grade fantasy featuring Dominican myths and legends and exploring the lasting ramifications of the dictatorship of Rafael Trujillo in the country. Julian will be in conversation with Carlos Hernandez, author of the Sal & Gabi series. Both authors will be signing their books, available for preorder below or on sale at the event.

ABOUT PILAR RAMIREZ AND THE ESCAPE FROM ZAFA

The Land of Stories meets Dominican myths and legends come to life in Pilar Ramirez and the Escape from Zafa, a blockbuster contemporary middle-grade fantasy duology starter from Julian Randall. Fans of Tristan Strong and The Storm Runner, here is your next obsession.

Twelve-year-old Pilar Violeta “Purp” Ramirez’s world is changing, and she doesn’t care for it one bit. Her Chicago neighborhood is gentrifying and her chores have doubled since her sister, Lorena, left for college. The only constant is Abuela and Mami’s code of silence around her cousin Natasha—who vanished in the Dominican Republic fifty years ago during the Trujillo dictatorship. When Pilar hears that Lorena’s professor studies such disappearances, she hops on the next train to dig deeper into her family’s mystery. After snooping around the professor’s empty office, she discovers a folder with her cousin’s name on it . . . and gets sucked into the blank page within. She lands on Zafa, an island swarming with coconut-shaped demons, butterfly shapeshifters, and a sinister magical prison where her cousin is being held captive. Pilar will have to go toe-to-toe with the fearsome Dominican boogeyman, El Cuco, if she has any hope of freeing Natasha and getting back home.

Julian Randall is a Living Queer Black poet from Chicago. His poetry and essays are published in the New York Times Magazine, POETRY, The Atlantic, and Vibe. He is the recipient of a Pushcart Prize. Julian holds an MFA in Poetry from Ole Miss. His first book, Refuse, won the Cave Canem Poetry Prize and was a finalist for an NAACP Image Award. He was also a contributor to the #1 New York Times-bestseller Black Boy Joy. Julian has previously worked as a youth mentor, teaching writing workshops to children on house arrest. Pilar Ramirez and the Escape from Zafa is his debut children’s novel. Follow him on Twitter!

Carlos Hernandez has published more than thirty works for fiction, poetry, and drama, most notably a book of short stories for adults entitled The Assimilated Cuban’s Guide to Quantum Santeria. He is an English professor at City University of New York, and he loves to both play games and design them. He lives with his wife, Claire, in Queens, New York. Follow him on Twitter: @WriteTeachPlay.

This event is organized by Word Up Community Bookshop and co-sponsored by Dominican Writers Association and Alianza Dominicana Cultural Center, with public funds from the New York City Department of Cultural Affairs in partnership with the City Council.

CANCELLATION POLICY: Word Up Community Bookshop reserves the right to cancel events for any reason, including but not limited to safety concerns.

CODE OF CONDUCT: Please note Word Up has a zero tolerance policy for harassment or intimidation of any kind during any event, virtual or in-person. Please read our Safe Space Policy for more information. Anyone violating these rules will be expelled from the event at the discretion of the organizers.

PHOTOS & RECORDING: Events may be recorded, and video and photos may be posted on our website, social media, and elsewhere. If you would prefer not to be visible, please let a Word Up team member know.

Word Up – How to Be a (Young) Antiracist