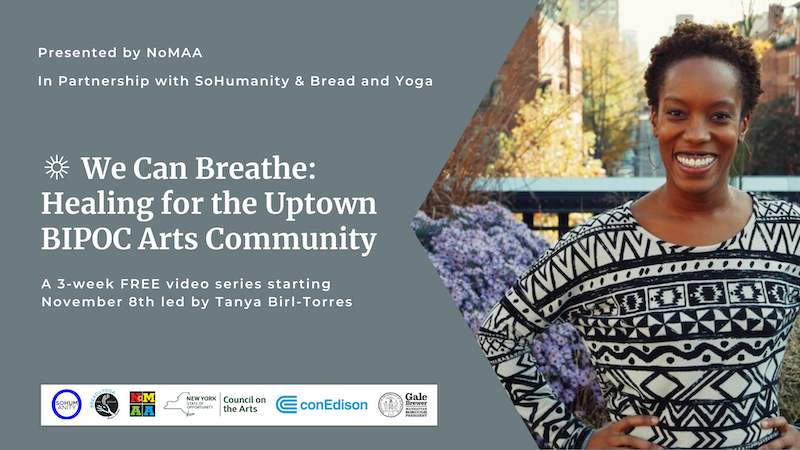 NoMAA’s Technical Assistance 2020 – We Can Breathe: Healing for the BIPOC Uptown Arts Community

Join us for a FREE 9-video series of inspirational videos centered around Black, Indigenous, people of color in collaboration with artists from the Uptown community. Black, Indigenous and People of Color, as well as allies committed to dismantling white supremacy in themselves, their work and the world who are performers and artists are all welcome!

ABOUT THE SERIES:
In this series we use the breath, stillness and movement exploration as tools for artists and performers to access their creativity. The word inspiration literally means the drawing in of breath! As artists, this is our call to action! To be filled with so much inspiration that our art moves us and others towards change.

Tanya Birl-Torres of SoHumanity and teacher at Bread and Yoga, will lead each video, pairing movement, breath work and space for contemplation with the works of uptown visual and musical artists as a means to ground, inspire and celebrate our community.

As we process the triple pandemic of COVID-19, systemic racism and climate change, we will use this platform as an opportunity to create space for artists to process the effects of these turbulent times and to liberate their artistic voice.

The videos will be released in 3 themes, 1 per week starting November 8th! There will be a 5-minute, 15-minute, and 30-minute videos for each week. You’ll be able to access the links to the videos at the bottom of this post as we release them.

Tanya believes in creating spaces that move us towards curiosity and connection. She has a passion and a vision to use her artistry to blur the lines between performer and audience, teacher and student, recognizing that we are all creative by nature of being born. Tanya has spent the past decade as a Broadway dancer, movement director and choreographer working with Institutions such as the Public Theater, The Signature Theater and The Oregon Shakespeare Festival to name a few. Tanya is also a trained 500 hr RYT Yoga Teacher with Illumina Yoga and has studied at The Presencing Institute at MIT, as a systems change facilitator. She is certified in trauma informed yoga and leads workshops for yoga students, public school educators and artists on ‘Embodying Change’ and ‘Reclaiming the Rights of the Body.’ She currently teaches weekly at Bread and Yoga in Inwood and has dedicated her classes to the resistance and dismantling of white BODY supremacy in spiritual and wellness spaces.

Tanya is focused on taking powerful ideas and visions and grounding them in the body. Tanya works at the intersection of the arts, justice and systemic change teaching people how to hold difficult conversations coming up through their artistry, home and work lives and sharing how we enter into them while staying present and in the body. She believes that in itself is an act of justice. Using movement, yoga, creative connection and curiosity as a means to ground, source and embody the truth of who we are.

Grammy nominated violinist Curtis Stewart enjoys an eclectic career bouncing between various realms of music: from MTV specials with Wyclef Jean and sold out shows at Madison Square Garden with Stevie Wonder, Bruce Springsteen, and Seal, to stints at the Kennedy center with the Jimmy Heath Big Band and performance installations at the Whitney Museum, the Guggenheim Museum, and Museum of Modern Art in NYC.

Curtis has performed as a classical soloist at Lincoln Center, and Carnegie Hall, as a special guest soloist/curator with the New York Philharmonic, made chamber music appearances at the Metropolitan Museum of Art, and the Newport Jazz Festival. His ensembles PUBLIQuartet and The Mighty Third Rail realize a vision to find personal and powerful connections between styles, cultures and musics. Curtis has worked with today’s forward thinking musicians including Henry Threadgill, Jason Moran, members of International Contemporary Ensemble, Billy Childs, the JACK quartet, members of Snarky Puppy, Don Byron, Linda Oh, Ari Hoenig, Matt Wilson, among many others.

Daniel J. Watts is a 2020 Tony Award nominee and Outer Critics Circle Award Winner for his portrayal of Ike Turner in the hit broadway musical TINA. He has appeared in nine Broadway shows including Hamilton, Memphis, and After Midnight. He received the Barrymore Award (Peoples Light) and the LA Ovation Award (Geffen Playhouse) for best featured actor for his portrayal of Sammy Davis, Jr. in “Lights Out: Nat King Cole” opposite Dulé Hill. TV credits include Season 3 of “The Marvelous Mrs. Maisel”, Seasons 1 & 2 of “The Last OG”, “Blindspot”, & “Vinyl”.

Off-Broadway he has starred as the title character in Suzan-Lori Parks’ “Death of the Last Black Man in the Entire World AKA The Negro Book of the Dead” (Signature Theatre) & “Whorl Inside A Loop” (2nd Stage).

A play-on-words, Daniel J. Watts’ THE JAM pays homage to Watts’ great-grandmother who, after making jam from scratch, would share with others what she
was unable to consume herself. THE JAM is Watts’ continuation of that
legacy, blending elements of stand-up comedy and compelling storytelling with his
original spoken word, often set to music and/or dance. The Jam: Only Child was a wide success at the 2020 Public Theatre Under The Radar Festival and will be streamed as part of the Signature Theater (DC) 2020-2021 season.

Watts is an artist in residence at ASU Gammage and has also served as an adjunct professor of NYU’s Tisch New Studio.

NDI & THE ART OF TEACHING FUNDAMENTALS | ON ZOOM