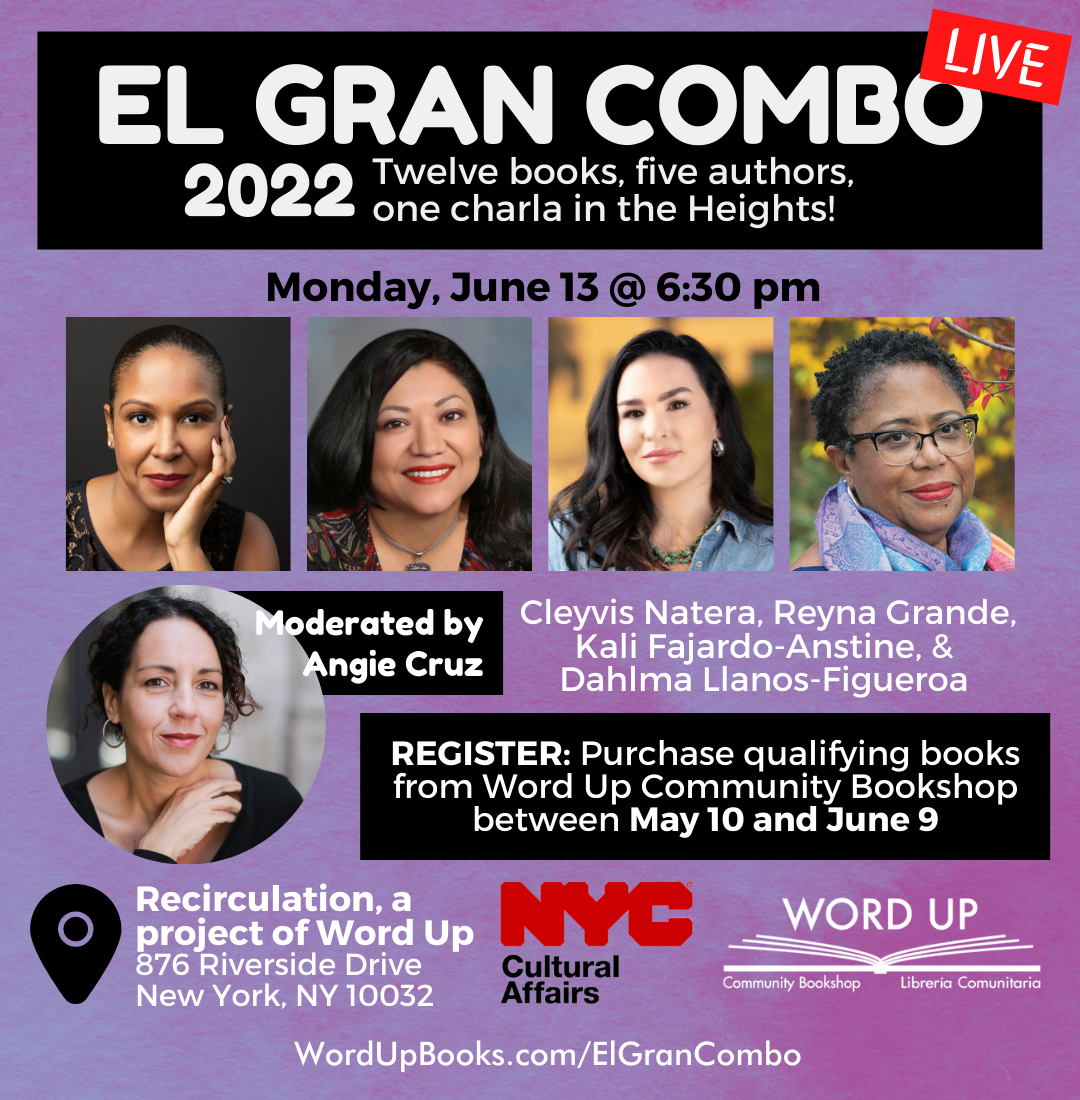 Buy a participating book from the list below between May 10 and June 9 and get an invite to a private in-person event on Monday, June 13, 2022, 6:30–8:30pm EST at Recirculation in Washington Heights, NYC. Hardcover, paperback, and large print versions all qualify.

After the reading and conversation, the authors will be signing their books. Please preorder the books you’d like signed on WordUpBooks.com (for pickup). Books will also be sold onsite at the event.

In compliance with the NYC regulations, all attendees for this event must show proof of vaccination and ID. In line with Word Up’s community safety guidelines, all attendees must remain masked at all times. Please arrive at least 30 minutes before the event so we can check vaccination cards and ID.

Cleyvis Natera was born in the Dominican Republic, migrated to the U.S. at ten years old, and grew up in New York City. She holds a BA from Skidmore College and an MFA from New York University. Her writing has won awards and fellowships from PEN America, the Bread Loaf Writers’ Conference, The Kenyon Review’s Summer Writers Workshops, and the Virginia Center for the Creative Arts. She lives with her husband and two young children in Montclair, New Jersey. Neruda in the Park is her first novel.

Kali Fajardo-Anstine is the author of Sabrina & Corina, a finalist for the National Book Award, the PEN/Robert W.Bingham Prize, The Story Prize, and winner of an American Book Award. Her debut novel, Woman of Light, will be published in June, 2022. She is the 2021 recipient of the Addison M. Metcalf Award from the American Academy of Arts and Letters. Her work has been honored with the Denver Mayor’s Global Impact Award for Excellence in Arts & Culture and the Mountains and Plains Independent Booksellers Association Reading the West Book Award for Fiction. She has written for The New York Times, Harper’s Bazaar, ELLE, The American Scholar, Boston Review, and elsewhere, and has received fellowships from MacDowell, Yaddo, Hedgebrook, and Tin House. Fajardo-Anstine holds an MFA from the University of Wyoming and has lived across the country, from Durango, Colorado, to Key West, Florida. She is the 2022–2023 Endowed Chair in Creative Writing at Texas State University. She is from Denver, Colorado.

Dahlma Llanos-Figueroa was born in Puerto Rico and raised in New York City. She is a product of the Puerto Rican communities on the island and in the South Bronx. As a child she was sent to live with her grandparents in Puerto Rico where she was introduced to the culture of rural Puerto Rico, including the storytelling that came naturally to the women in her family, especially the older women. Much of her work is based on her experiences during this time. Llanos-Figueroa taught creative writing, language and literature in the New York City school system before becoming a young-adult librarian and writer. The hardcover edition of Daughters of the Stone was shortlisted as a 2010 Finalist for the PEN/Robert W. Bingham Prize. Her short stories have been published in anthologies and literary magazines such as Breaking Ground: Anthology of Puerto Rican Women Writers in New York 1980-2012, Growing Up Girl, Afro-Hispanic Review, Pleaides, Latino Book Review, Label Me Latina/o, and Kweli Journal. She lives in New York City.

Reyna Grande is the author of the bestselling memoir, The Distance Between Us, (Atria, 2012) and the sequel, A Dream Called Home (Atria, 2018). Her other works include the novels, Across a Hundred Mountains, (Atria, 2006) and Dancing with Butterflies (Washington Square Press, 2009), as well as The Distance Between Us young readers edition (Aladdin, 2016). Her books have been adopted as the common read selection by schools, colleges, and cities across the country. Her two recent books are A Ballad of Love and Glory (Atria, March 15, 2022), a novel set during the Mexican-American War, and an anthology by and about undocumented Americans called Somewhere We Are Human: Authentic Voices on Migration, Survival and New Beginnings (HarperVia, June 7, 2022). Reyna has received an American Book Award, the El Premio Aztlán Literary Award, and a Latino Spirit Award. In 2012, she was a finalist for the prestigious National Book Critics Circle Awards, and in 2015 she was honored with a Luis Leal Award for Distinction in Chicano/Latino Literature. The young reader’s version of The Distance Between Us received a 2017 Honor Book Award for the Américas Award for Children’s and Young Adult Literature and a 2016 Eureka! Honor Awards from the California Reading Association, and an International Literacy Association Children’s Book Award 2017. Writing about immigration, family separation, language trauma, the price of the American Dream, and her writing journey, Reyna’s work has appeared in The New York Times, the Dallas Morning News, CNN, The Lily at The Washington Post, Buzzfeed, among others. In March 2020, she was a guest in Oprah’s Book Club television program. Born in Iguala, Guerrero, Mexico, Reyna was two years old when her father left for the U.S. to find work. Her mother followed her father north two years later, leaving Reyna and her siblings behind in Mexico. In 1985, when Reyna was nine, she left Iguala to make her own journey north and ran across the US-Mexico border to reunite with her family. After attending Pasadena City College for two years, Reyna became the first person in her family to set foot in a university. She went on to obtain a B.A. in creative writing and film & video from the University of California, Santa Cruz. She later received her M.F.A. in creative writing from Antioch University.

Angie Cruz is a novelist and editor. Her fourth novel, How Not To Drown in A Glass of Water is forthcoming Fall 2022. Her novel, Dominicana was the inaugural book pick for GMA book club. It was shortlisted for The Women’s Prize, longlisted for the Andrew Carnegie Medals for Excellence in Fiction, The Aspen Words Literary Prize, a RUSA Notable book and the winner of the ALA/YALSA Alex Award in fiction. It was named most anticipated/ best book in 2019 by Time, Newsweek, People, Oprah Magazine, The New York Times, and Esquire. Cruz is the author of two other novels, Soledad and Let It Rain Coffee and has published shorter works in VQR, The Paris Review, and other journals. She’s the founder and Editor-in-chief of the award winning literary journal, Aster(ix) and teaches at University of Pittsburgh. She divides her time between Pittsburgh, New York and Turin.

CANCELLATION POLICY: Word Up Community Bookshop reserves the right to cancel events for any reason, including but not limited to safety concerns.

CODE OF CONDUCT: Please note Word Up has a zero tolerance policy for harassment or intimidation of any kind during any event, virtual or in-person. Please read our Safe Space Policy for more information. Anyone violating these rules will be expelled from the event at the discretion of the organizers. Please report all harassment to events@wordupbooks.com immediately.

PHOTOS & RECORDING: Events may be recorded, and video and photos may be posted on our website, social media, and elsewhere. If you would prefer not to be visible, please let a Word Up team member know.

ACCESSIBILITY: Recirculation is a wheelchair-accessible space with one ramp from the street level down to the store. Most of the shelves are on wheels and can be moved to provide additional access. The bathrooms are not yet ADA compliant and do not yet have a changing table but are gender neutral. The events are mic’d for sound and videos are captioned when possible. Free ASL interpretation is available for most programs upon request. Please email events@wordupbooks.com to request interpretation as early as possible. If you have specific questions about the space or how an event can be made more accessible to you, please do not hesitate to contact us at info@wordupbooks.com.