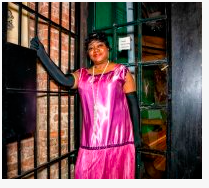 Table seating may be reserved for the suggested donation amount, which goes directly to supporting the artists. Floor seating is available at no cost on a first-come-first-serve basis.

In accordance with NYC’s vaccine mandate, proof of vaccination is required for this event.

Beareather Sings the Classic Blueswomen – A Historical Tribute takes the audience on a journey through the 1920’s and the 1930’s, when the black female blues singer reigned supreme. A time when the blues women worked, lived and loved hard. They spoke their minds through their songs. We will give you a wormhole view of a golden era when blues singers like Mamie Smith, Ma Rainey, Bessie Smith, Ethel Waters, Ida Cox, Lucille Bogan, Sipple Wallace and Victoria Spivey stole our hearts and captured our souls.