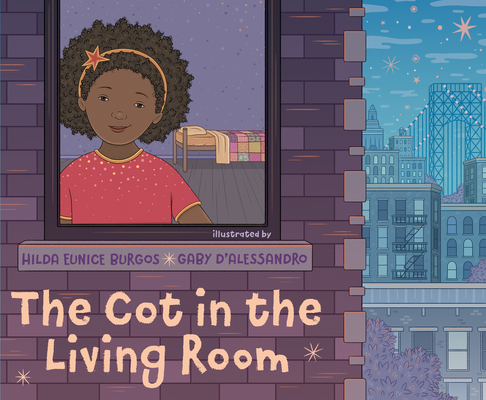 Join us for a virtual launch event with Hilda Eunice Burgos and Gaby D’Alessandro for their new picture book, THE COT IN THE LIVING ROOM about a young Dominican American girl in Washington Heights who moves from jealousy to empathy as her parents babysit children whose families work overnight shifts.

This event will include a reading, a drawing demonstration and an audience Q&A.

About THE COT IN THE LIVING ROOM
A young Dominican American girl in New York City moves from jealousy to empathy as her parents babysit children whose families work overnight shifts in this honest and warm picture book debut. Night after night, a young girl watches her mami set up a cot in the living room for guests in their Washington Heights apartment, like Raquel (who’s boring) and Edgardo (who gets crumbs everywhere). She resents that they get the entire living room with a view of the George Washington Bridge, while all she gets is a tiny bedroom with a view of her sister (who snores). Until one night when no one comes, and it’s finally her chance! But as it turns out, sleeping on the cot in the living room isn’t all she thought it would be.

Hilda Eunice Burgos is the author of the middle grade novel Ana María Reyes Does Not Live in a Castle (Lee&Low). Her parents emigrated from the Dominican Republic before she was born, and she grew up in Washington Heights as one of four sisters. She now lives with her family near Philadelphia, where she works as an environmental lawyer.

Gaby D’Alessandro is a Dominican illustrator based in Brooklyn. She attended Altos de Chavón in the Dominican Republic and moved to New York to complete her degree in Illustration at Parsons School of Design. Her work has appeared in many publications, and her clients include The New York Times, the Library of Congress, the Botanical Garden of Padua, and New York City’s MTA.