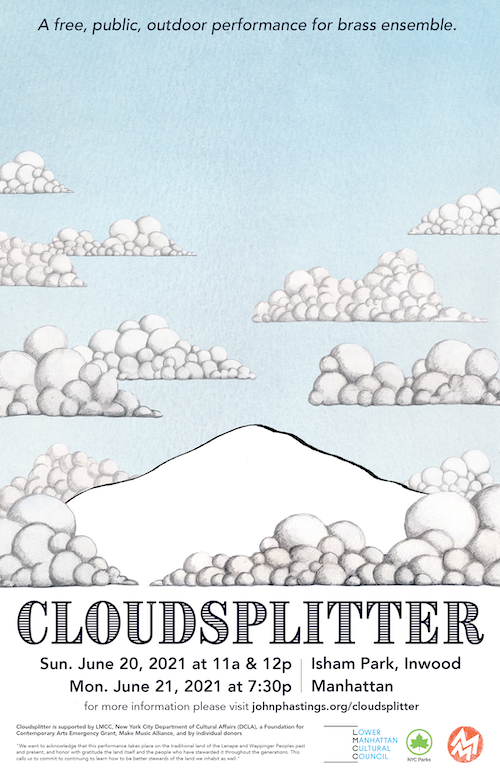 Cloudsplitter, for a dozen brass instruments, is a community directed performance located in Isham Park, Inwood, northern Manhattan, New York, NY. The performances will take place Saturday June 20, 2021 at 11am and 12pm and on Monday, June 21, 2021 at 7:30pm. This performance will be a continuation of a series of neighborhood performances that I have created in Upper Manhattan including Muscota Marsh Harmony in 2018 and Passages | Pasajes in 2019.

Much of the 20 acres of the park will be utilized as the performers begin spread out throughout the park. Slowly, over the course of the 40 minute performance, they will come together in small groups and then finally into a complete group, a visual and aural harmony. Along with the traditions and histories that the players bring to the performance, the performance around the mythic persona of radical abolitionist John Brown. The title, Cloudsplitter, is a reference to the author Russell Bank’s novel on John Brown, which  alludes to the highest point in New York State (Mt. Marcy) also known as, Tahawus, a word some translate as “Cloudsplitter”. John Brown’s favorite hymn, “Blow, Ye Trumpets, Blow!”, as well as the Civil War era March “John Brown’s Body” will be used as a centering device for the performance, a reference point to construct the harmonic and melodic content of the musical work.