Actor, composer, writer and NoMAA supporter Lin-Manuel Miranda reveals the story behind his Tony award-winning musical, In The Heights.

In an attempt to cope with his first major break-up and make his mark during the Latin pop boom, Lin-Manuel Miranda sat down his sophomore year at Wesleyan to pen his first full-length musical. Less than a decade later, In The Heights, his musical about Washington Heights, had won four Tonys (including ones for Best Musical and Best Score) and had been nominated for the 2009 Pulitzer Prize for Drama, making Lin-Manuel Miranda one of the most successful writer/composers working on Broadway.

In this video interview, the actor, composer, writer and NoMAA supporter talks about his early experiences with musical theater, his inspiration for In The Heights, and the importance of writing a musical that no one else can write.

(Video posted with permission from THNKR.) 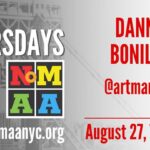